I’ve made a couple of changes to my live Hot Roleplaying Games chart. The chart monitors over a quarter of a million forum members and approaching a thousand blogs on a selection of major independent RPG discussion forums to create an overall sample of what games are being discussed on the web. The changes I’ve made are as follows (they will take 90 days to fully reflect, though):

•OSR games are now counted via a public system datafile which you can find here. You are able to edit and add games yourself. The system currently tracks over 160 OSR games. If something is missing, you can add it right there by editing the wiki page. The system updates itself monthly.
•There are now separate entries for Paizo Official and WotC Official to the entries for D&D and Pathfinder. This is because the system does not typically measure a company’s official forums, and as such figures would skew the samples unless *all* official forums could be included. However, folks did ask for them, so I have included scanning of WotC’s and Paizo’s official forums. The reason it’s separate is so that you can exclude it for comparison purposes, as those are the only official forums included. Therefore, treat those entries simply as being for information purposes, and feel free to compare the two to directly *each other* but your shouldn’t count them when comparing overall brand traffic. It’s important to realize that those two companies will be over-represented if you include them when comparing against games other than Pathfinder or D&D.
•That said, the data’s there, so you can add it to the other entries if you want to. Up to you what you do with the raw data! Enjoy it, ignore it, announce loudly why it’s wrong, whatever you like!

As a reminder, it’ll take 90 days for the stats to fully catch up with the changes, as the new tracking began today (thought the OSR list shouldn’t change much – it’s the same list it was using before, but is public now).

Not everything I had hoped it would cover (although I can just add in the sections I intend to create later on) but it definitely has some extremely interesting and unforeseen (form my point of view) sections. And if it is anywhere nearly as good as the Player’s Handbook or the Monster Manual then I very much look forward to owning my copy.

If you find this article useful, please share it with your friends!
That D&D 5E Dungeon Master’s Guide table of contents yesterday? It’s been updated with a new version. An extra 12 pages (including a new 6-page “Maps” appendix) and small number of other minor changes throughout – mainly slight variations in section names, although a new two-page “Madness” section appears in part 3, while the “Rewards at 20th Level” entry is gone. 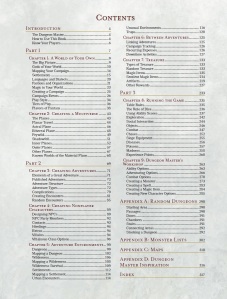 There Be Monsters Here! (A Pre-Release Review of D&D Monster Manual by Wizards of the Coast)

If you find this article useful, please share it with your friends!

Share on facebook Share on twitter Share on email Share on print More Sharing Services 7
Despite the ending of the summer and the lull after GENCON and PAX PRIME, the excitement at the release of the new 5th Edition Player’s Handbook last month is still going strong! And by all accounts, the new adventure arc Hoard of the Dragon Queen is doing quite well, with many D&D fans enjoying the new organized play activities presented each week in stores around the country.

But now, D&D enthusiasts have a new release coming up at the end of this month – the D&D Monster Manual goes on sale this Friday the 19th of September in select stores, and for general retail sales on the 30th! As the second core rulebook for the new 5th Edition of D&D, the Monster Manual is an absolute essential purchase for any Dungeon Master looking to create their own worlds and adventures.

So how does this new D&D Monster Manual compare to its predecessors? Read on and find out!

THE BEST RPG SITE ON THE INTERNET

If you’re a gamer then I recommend them.

A thread I started on EN World on how to play the Bard.

HOW DO YOU PLAN TO PLAY YOUR BARD?