THE COLLEGES TO COME?

Following up on the LARPful post. This could be an excellent stimulus for the imagination. Especially for writers. artists, actors, and perhaps even scientists who wanted a free-flowing environment to conduct chemical and physical experiments and make observations in a fun environment.

I can also see this being transformed easily into a Vadding Experience (the exploration of both modern and older ruins), that is LARPing could be used an an environment to train Vadders.

And finally this could also be easily used as a platform to develop ARGs (Alternate Reality Games and LARPs) and could even be used to train participants in Real World Skills (TSS: Transferable Skill Simulations) and in subjects such as ancient technologies and history.

So this could also easily become a GPAD, a Game of Personal Advancement and Development.

Anyway as far as the current Crowdfunding Project goes Claus, Good Luck and Godspeed. To you, your partners, and participants.

College of Wizardry: As Real As Wizard School Gets

Do you want to experience four days as a witch or wizard in a fairytale castle? Here’s your chance!

IMPORTANT NOTICE: If we do not manage to reach our goal of $175,000, which enables us to do all three November events, and we need to cancel an event, you will of course get a full refund if the event you’ve signed up for (with a $374, $375 or 376$ reward). We’re quite confident we’ll do all three events, though. 😉

College of Wizardry is a four-day Wizard School larp event, where you can act out your dreams of being a student witch or wizard at a beautiful fairytale castle in Poland. Surrounded by around 130 like-minded people, at College of Wizardry you will: 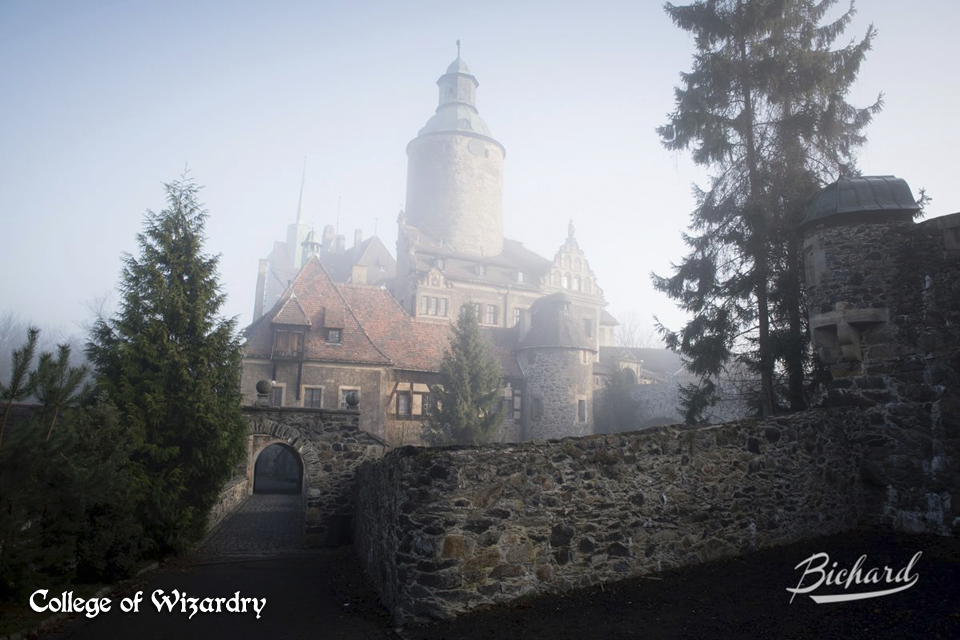 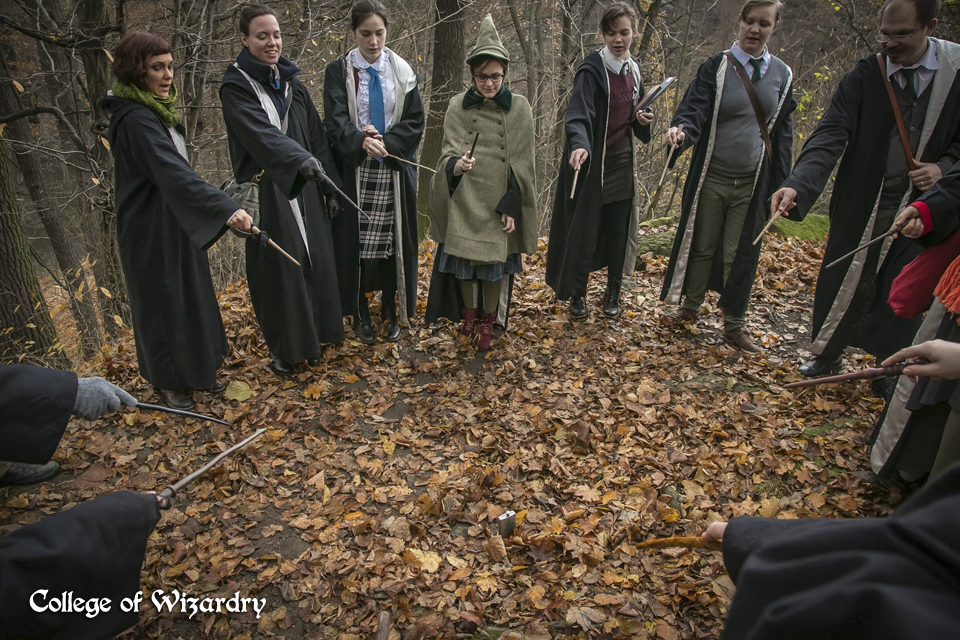 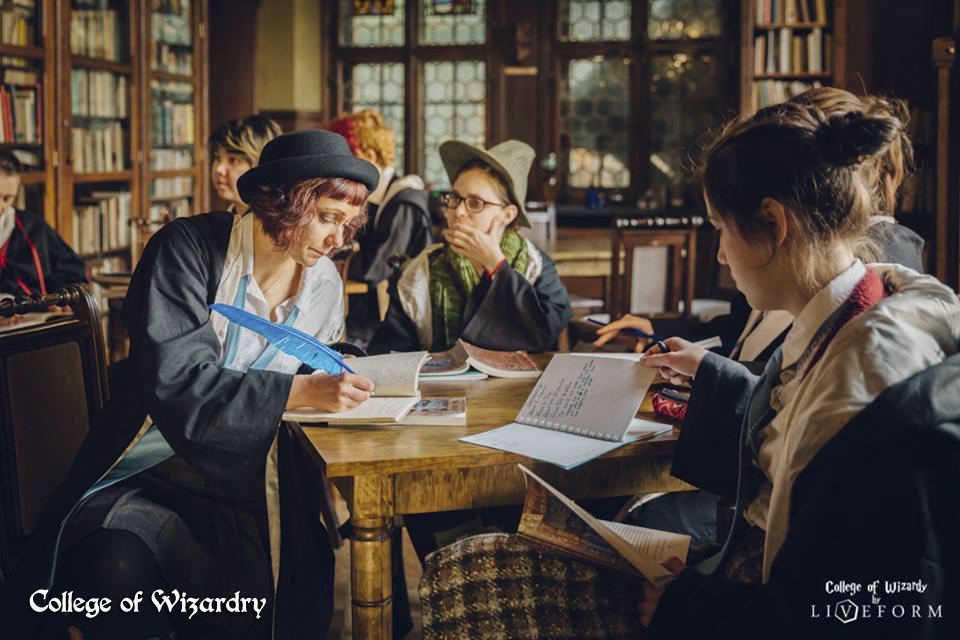 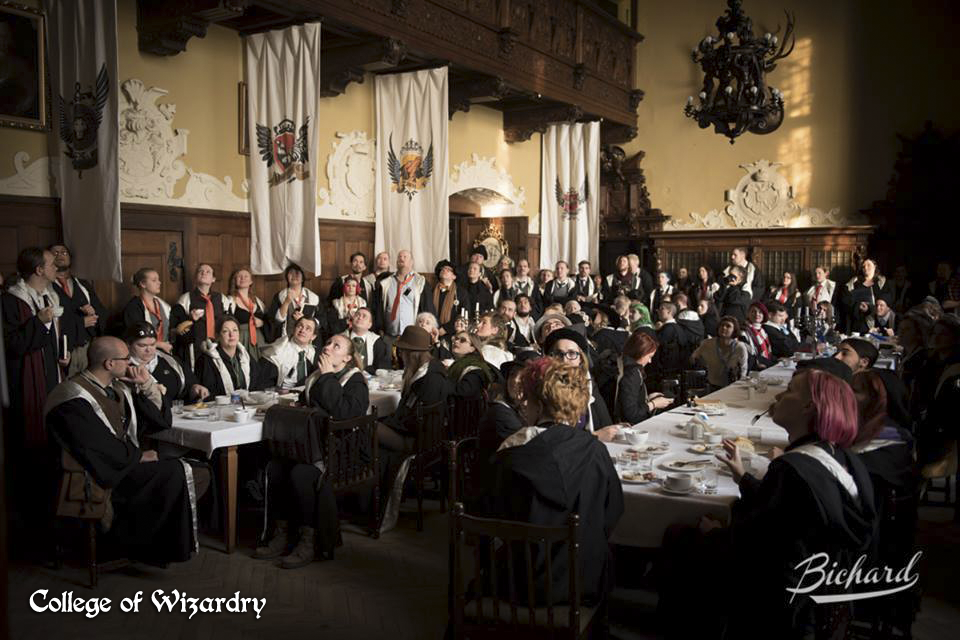 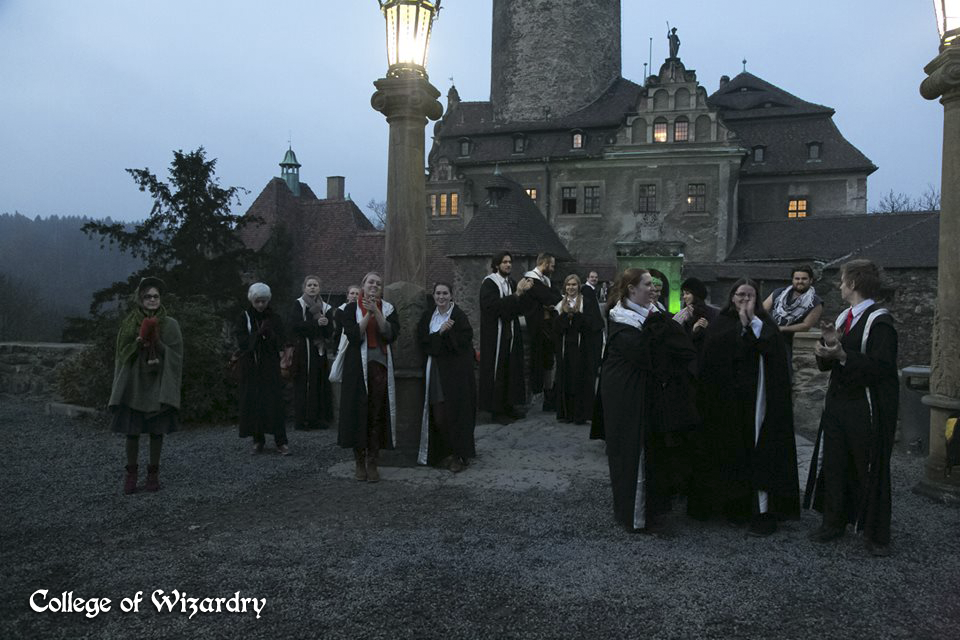 If you’re not familiar with it already, the term “larp” is a shortened form of Live Action Role Play. In a larp, the participants dress up in costume and pretend to be their characters. A larp can last for hours or for days, and can have from a couple of players to many thousands. Some larps are about elves and orcs in the forest, while others are about advertising agencies, prisons or … magical universities!

If you want to know more about larp, you can check out this short documentary, that Discovery Channel/TLC did in 2013.  It does a good job at explaining Nordic style larp, but it’s about a rather more harsh experience, so don’t get scared away!  😉

In November 2014, a team of volunteers from the non-profit organisations Liveform (Poland) and Rollespilsfabrikken (Denmark) created the larp event College of Wizardry at the fariytale Czocha Castle in Poland. It was such a success that two more larps were planned for April 2015. Both sold out in record time.

So today, we bring you this campaign, because we want to do more than just two CoW larps in 2015. And for that, we need your help. But first something important.

Warner Bros. kindly allowed us to continue with our unauthorised Harry Potter larp event, on a one-off, non-commercial basis, to avoid disappointing the fans who had booked and paid for their places.

We want to make clear that we have agreed with Warner Bros. that our future larps will not include or be connected in any way with any part of the Harry Potter world.

So please note that this larp is NOT based on nor will it involve the use of any Harry Potter stories, characters, names or elements.  It is not a Harry Potter fan event, but is for those larp participants who wish to play in a generic wizard college setting.  College of  Wizardry larps will NOT take place in the Harry Potter universe, but in a universe of our own making. There will be no mention of Muggles, no Quidditch and no Hogwarts in our fiction. The whole idea behind this Indiegogo campaign is to make College of Wizardry stand on its own legs. 😉

We hope you’ll help that happen.

Our crowdfunding campaign has been receiving a bit of media attention. Below are some of the places where it’s been featured. If you’re interested in doing a story about College of Wizardry, you’re more than welcome to write us at claus.raasted@gmail.com. Here are links to a few of the articles. 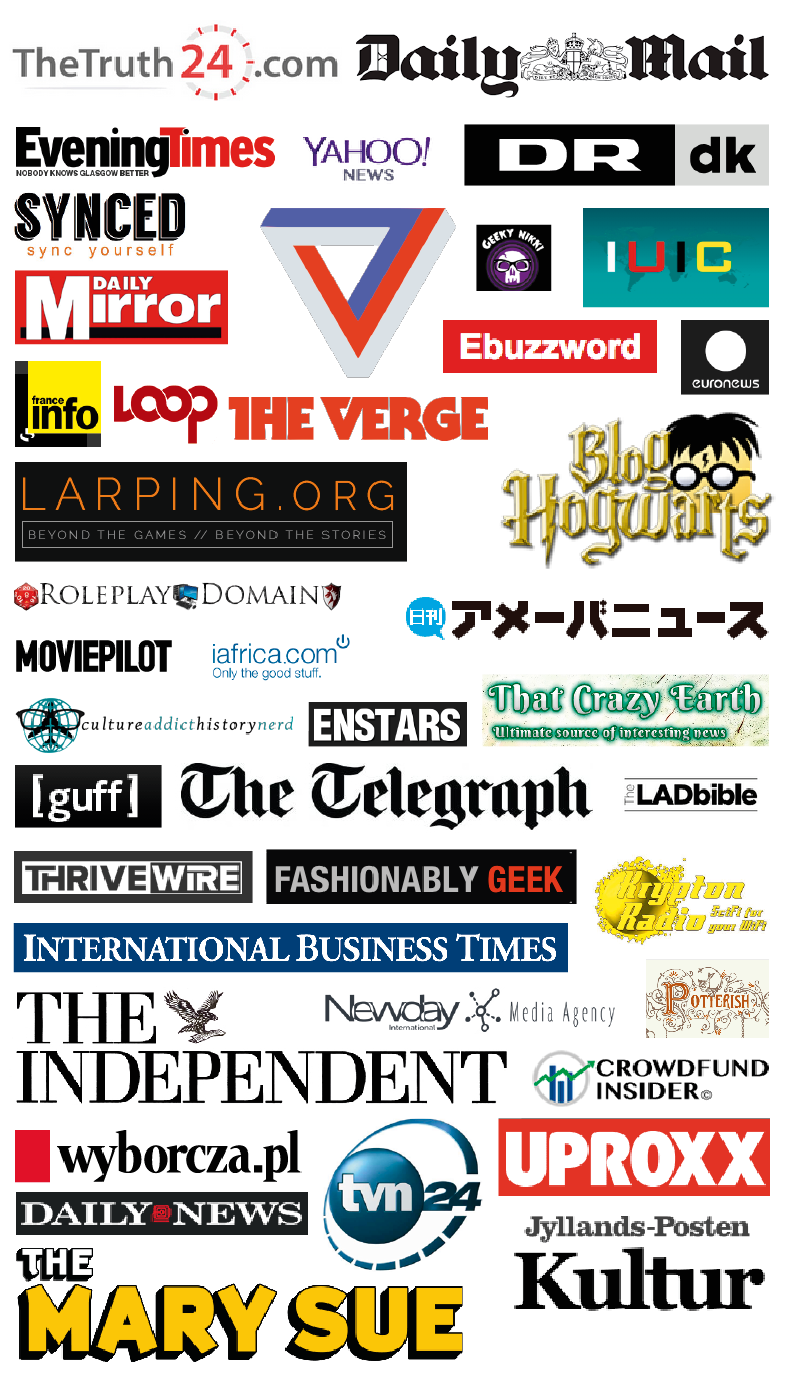 College of Wizardry is a four-day larp event, that starts Thursday afternoon and ends Sunday morning. We hope to hold three sessions this November, Nov 12-15, Nov 19-22, and Nov 26-29. If we fail to raise enough funds for all three events, we’ll of course give full refunds to those who’ve supported in vain.
We’re not really worried about that, though. 😉

But what actually happens during one of these events?

At CoW, participants play everything from students and teachers to ghosts and visiting reporters. After signup has closed, all players get to tell us what their preferences are, and we try to cast them as best we can.

You don’t need to have any larp experience to play CoW, as long as you’re willing to give it your best shot. It’s a participatory experience, so you’ll be both actor and audience at the same time. And don’t worry. It’s not that scary.

You’ll eat, sleep, and live at the Castle

Some people ask us about lodgings and nearby hotels. Czocha Castle IS a hotel, and as a participant, you’ll be staying there for the duration of the larp. You’ll be staying in 2-4 person rooms along with other participants – and if you go with a friend or three, we’ll of course give you a room together. When the game starts, it doesn’t end until it’s over, and even eating breakfast and enjoying a glass of port wine happens in character.

Much more than just classes

Though there are classes from 9.00 – 16.00, not all day is spent in the classroom. First of all, there are meals, but also Czocha College is home to a string of societies (some secret, some well-known) and there are things going on at all times. There is a castle to explore, a forest to visit and there nearby tavern to grab a beer at. Oh, and then there’s initiation of Juniors, House rituals and more. In short, there’s plenty of stuff going on at the castle at all hours.

A magical college wouldn’t be complete without a magical ball to end the event. Here, the Czocha Polka will be danced, the legendary DJ’s “The Wicked Witches of West Berlin” will play and there’ll be speeches and entertainment. After that the game will end and there’ll be an afterparty of epic proportions!

We create our own magic

Obviously, none of us know real magic, but we have a pretty good system for how we pretend. It was invented by the Polish organization Liveform for College of Wizardry, and makes magic work in intuitive and fun ways. 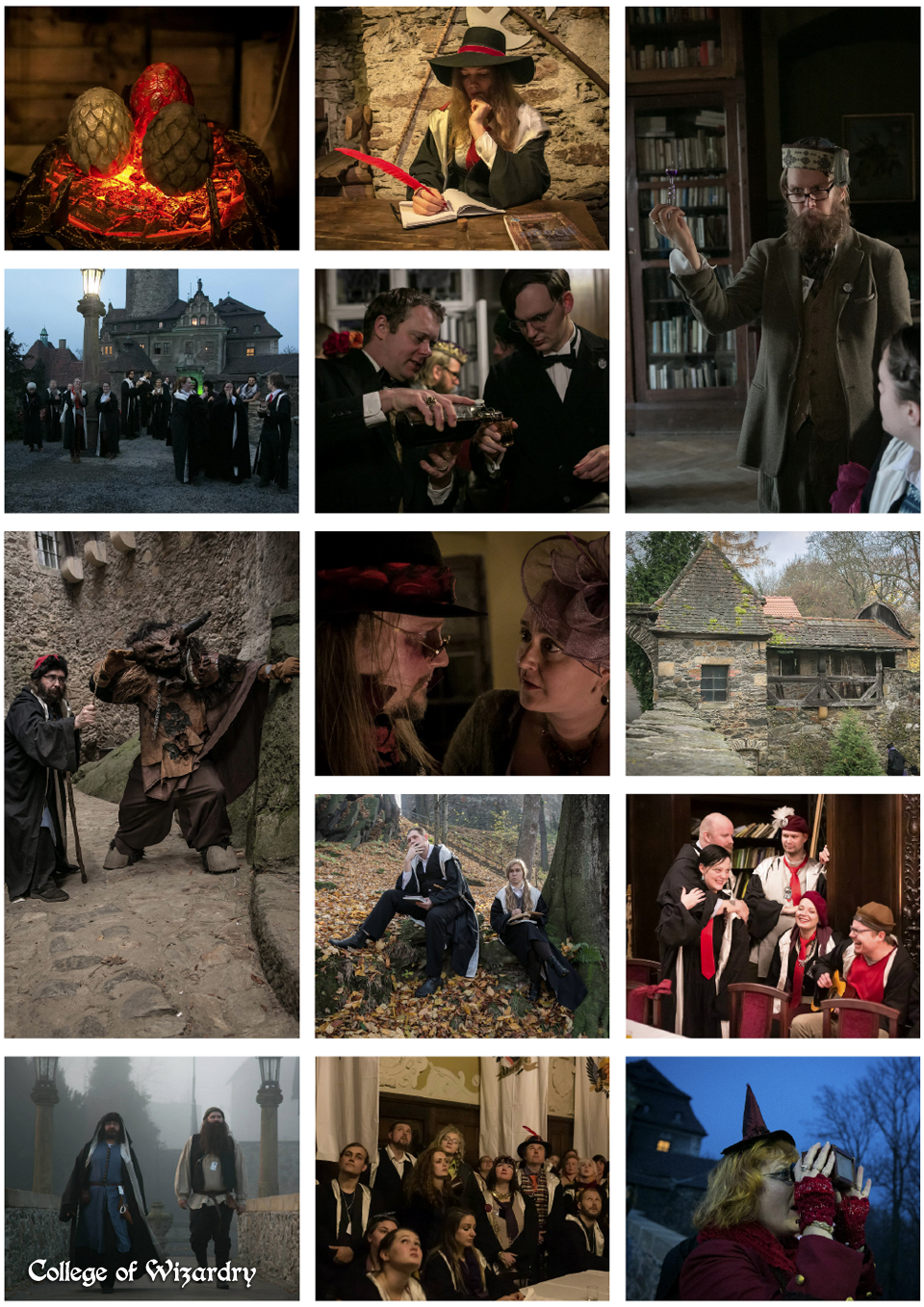 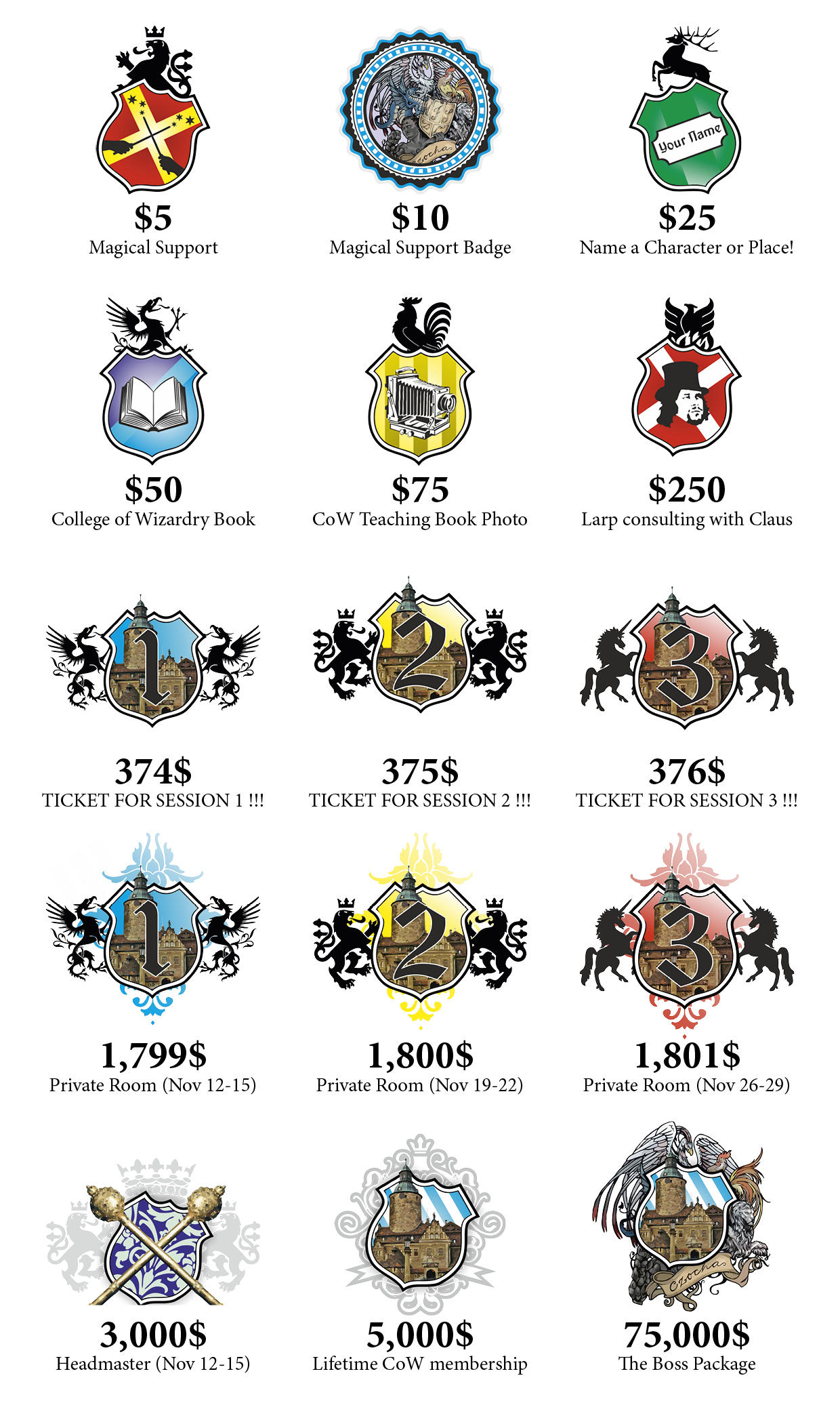 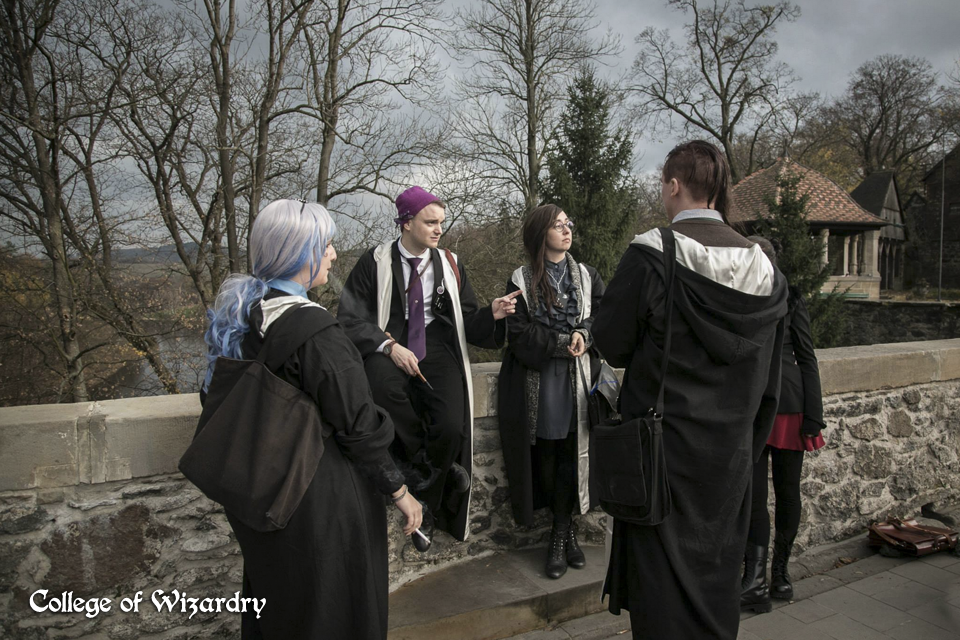 Our ambitions are modest, but are dreams are big. We may be volunteers doing this project through our two non-profit organizations, but we’re volunteers who dare to dream big.

–If we raise the extra 10k, we’ll do a physical teaching book for the larp and make it available online as a free web-based PDF. Think 200+ pages of magical teaching!

— If we reach this level of funding, we’ll fly in a documentary team, and make a 20-minute documentary of the new CoW experience for youtube.

$120,000 — We’ll not only do the book and the documentary, but also do two CoW larps back-to-back that more people can attend if the first sells out.

$1,000,000 — If we reach a million dollars, not only are we doing three events in November, and all the other things, but we’re also buying a castle in Poland, so that we can do future events at our OWN freakin’ castle. 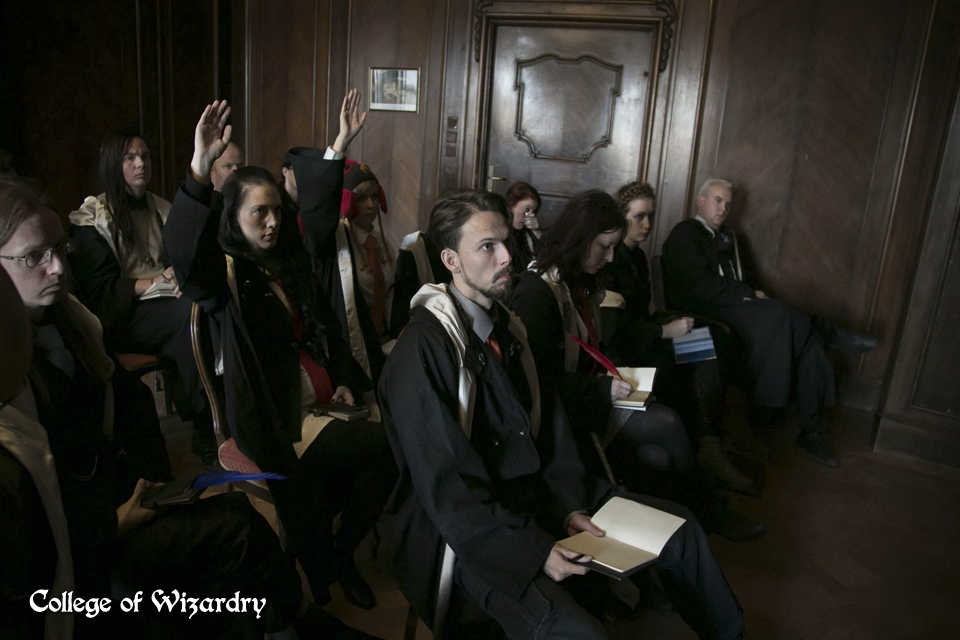 If we manage to raise more than $175,000 we’ll start adding stretch goals. But the ultimate stretch goal – the fever fantasy – is that we raise a million dollars. This will permit us to buy and refurbish a honest-to-Merlin castle in Poland. And if THAT happens, you can be sure that we’ll be doing more awesome events in the future. Put simply, if we reach a million dollars, we’re going to buy a castle and throw the craziest opening party ever.

Here’s one of those we have our sights on… 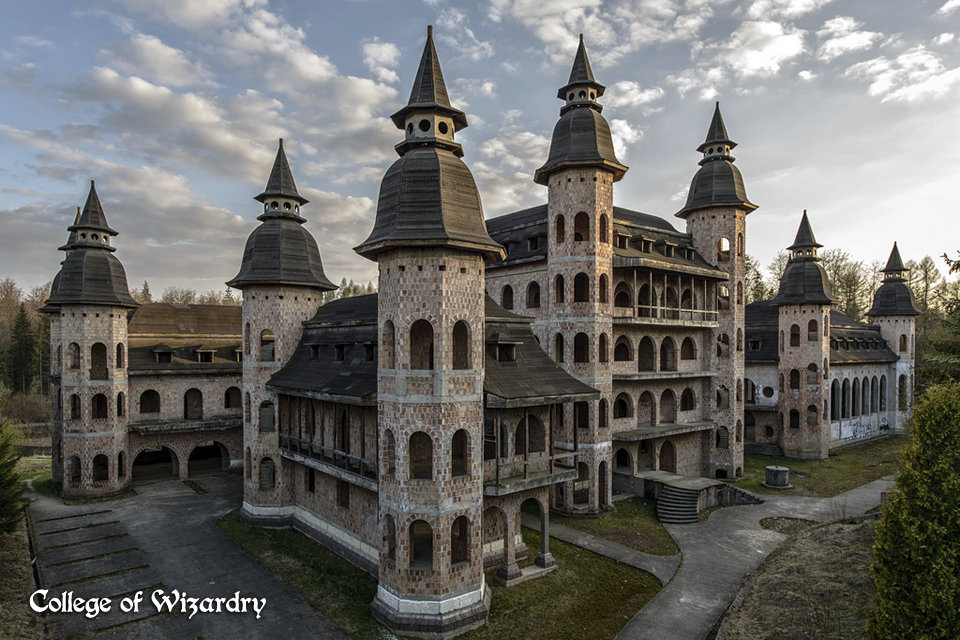 Imagine our world, just as it is today. Except that magic is real. The world of magic exists in the shadows of our own mundane world – undiscovered by billions, but known to the initiated. It’s a world of tradition and old bloodlines, of secrets and mysteries. It is a world of wise sorcerers, powerful witches, and dark-hearted conjurers.

Most of all, it is a world that is slowly changing. From the open practice of magic in ancient times to the secret rituals held in dark forests in medieval times to the completely underground magical world of today, the witching world is a parallel society that is under assault from modern culture.

Here, long-flowing robes and dragontooth wands meet jeans and leather jackets. Magical theory is taught in old castles to students at home on iPhones, and while some wizarding families proudly trace their lineage back to famous magicians such as Morgana le Fey or the Oracles of Delphi, there are powerful sorcerers popping up in suburban Chicago and downtown Shanghai.

The world of magic has its own politics, myths and rules, and is every bit as varied and diverse as the Mundane world. But there are three simple rules that are followed by all, whether noble master of charms or dark-hearted necromancer, known as The Traditions.

The Tradition of Word: You do not speak of magic to Mundanes.

The Tradition of Action: You do not practice magic around Mundanes.

The Tradition of Fear: Break these rules and you shall be cast out.

This is the world of magic. Welcome, magicians. 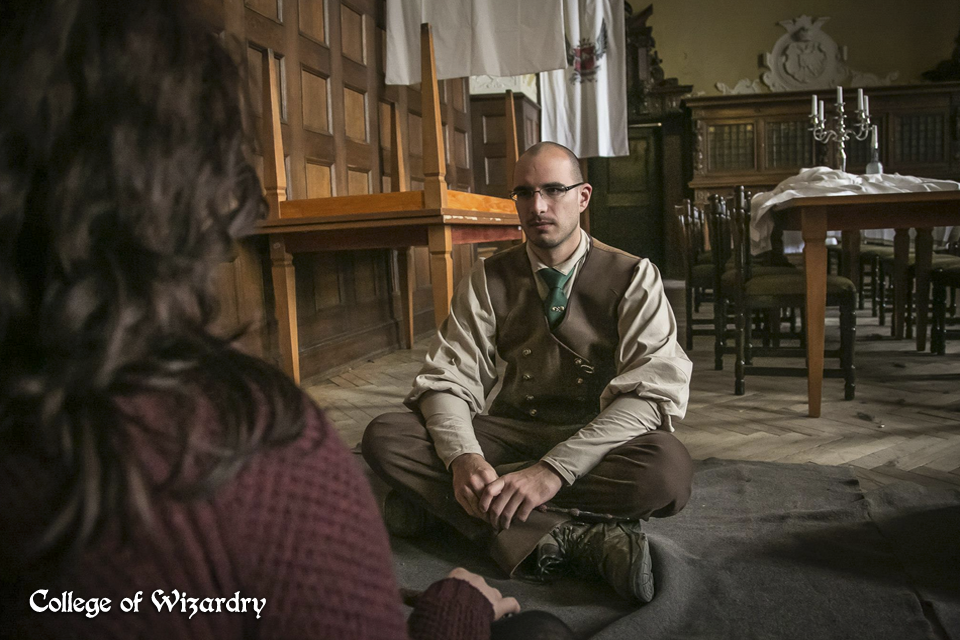 Making something like this happen requires much more than money. If you want to help us, we’d be very grateful if you’d mention our campaign on social media, write about us on your blog or use the hashtag #cowlarp. If nothing else, send a kind thought our way or give a high-five when you meet one of us. It all helps.