NO, SET PHASERS TO KILL 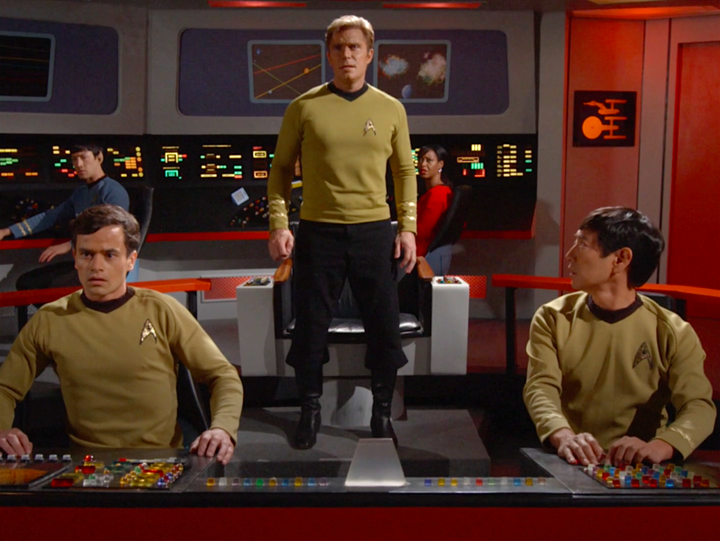 Set phasers on stunned: The vast ecosystem of Star Trek fan productions is about to undergo a radical change after CBS and Paramount Pictures released a set of new fan film guidelines.

According to the 10-point guidelines released on Thursday, Trek fan productions cannot “exceed 30 minutes total, with no additional seasons, episodes, parts, sequels or remakes,” cannot include “Star Trek” in their titles, cannot involve anyone who has worked on Star Trek films or series, and cannot raise more than $50,000 for an individual production. In return for following these and other guidelines, CBS and Paramount state they “will not object to, or take legal action against” any “non-professional and amateur” fan productions.

Most prominently, the guidelines would severely restrict plans for Axanar, the Trek fan film that CBS and Paramount sued for copyright infringement in December, and the production that appears to have sparked the guidelines in the first place. Gary Graham was set to reprise his role from Star Trek: Enterprise as a Vulcan ambassador; the production raised over $1.2 million in crowdfunding campaigns; and creator Alec Peters had planned for Axanar to be a feature-length production well over the 30-minute time limit.

The guidelines also seem to directly affect several of the most popular and well-regarded Trek fan productions over the past two decades, many of which operate as ongoing “series,” including Star Trek Continues and Star Trek New Voyages: Phase II. The former has raised well over $300,000 via several crowdfunding campaigns to support its elaborate recreations of the sets from the original Trek TV series, and the latter has featured episodes guest starring established Trek actors like Walter Koenig and George Takei.

Meanwhile, Star Trek: Voyager star Tim Russ is currently directing and starring in Star Trek Renegades: The Requiem, which co-stars Trek alum like Koenig, Nichelle Nichols, Terry Farrell, Robert Picardo, and Robert Beltran. According to the new guidelines, none of these actors would be able to continue with the production.

In response to the guidelines, Star Trek Continues creator and star Vic Mignognanoted in a Facebook post that the production “has the utmost respect for CBS and their right to protect their property as they see fit,” and that he is not yet certain what impact the new guidelines will have on his production. (The other aforementioned productions did not immediately respond to requests to comment, and a spokesperson for CBS said she could not comment on how the guidelines would affect individual fan productions.) 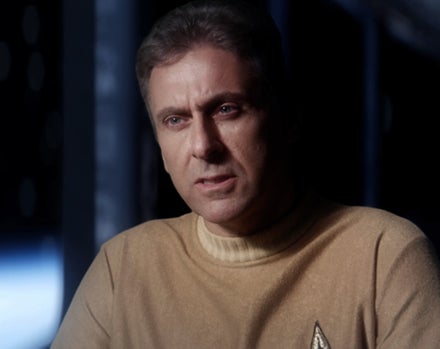 As BuzzFeed News detailed in a story last week, the lawsuit between Axanar Productions and CBS and Paramount has drawn so much attention that J.J. Abrams — who is producing the latest film, Star Trek Beyond — announced at aTrek fan event in May that due to lobbying from Beyond’s director Justin Lin, the lawsuit would be “going away” in a matter of weeks.

CBS and Paramount subsequentlyannounced in a joint statement that, along with its ongoing settlement negotiations with Axanar Productions, the studios were “working on a set of fan film guidelines.” While those guidelines are now official, however, the suit continues to be litigated by both sides.

In a brief joint statement from CBS and Paramount to BuzzFeed News on Thursday, a spokesperson said that lawsuit talks are still “ongoing,” and that the companies “continue to be hopeful that we will reach a settlement shortly.”

In a statement to BuzzFeed News on Thursday, however, Peters made clear that the guidelines CBS and Paramount ultimately created were not what he wanted:

I’m really disappointed that this set of guidelines represents the studios’ best efforts on behalf of fans. These guidelines appear to have been tailor-made to shut down all of the major fan productions and stifle fandom. In no way can that be seen as supportive or encouraging, which is very disheartening.

While CBS and Paramount claim to want to encourage the passion of fans to produce “reasonable fan fiction”, the restrictions presented do just the opposite, willfully ignoring over forty years of fan works that helped buoy the Star Trekfranchise through some very lean years and enthusiastically spread the magic of the franchise in more plentiful times.

Around the franchise’s 50th anniversary, we would have hoped CBS and Paramount would have taken this opportunity to unite with Star Trek fans in celebration of their creativity, not seek to crush it.

This story has been updated with statements regarding the Star Trek fan film guidelines from Axanar creator Alec Peters and Star Trek Continues creator Vic Mignogna. Jun. 23, 2016, at 4:55 p.m.

TO BOLDLY GO… AGAIN? – DESIGN OF THINGS TO COME

If they just concentrate upon science and exploration, as the original did, and even to some extent as TNG did, then I’m in. Totally in.

But I can’t stomach another “Enterprise” or yet another Jedi-wanna-be science fantasy or life-action anime series. I just can’t stomach that modern pseudo-science and amoral modern crap in my Star Trek anymore. That kinda stuff is for Star Wars, not Star Trek.

New Star Trek Television Series Coming In 2017 To CBS All AccessThe new series will premiere on CBS, then move to CBS All Access across digital platforms 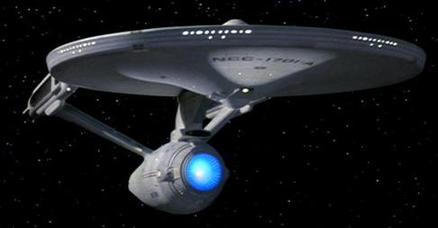 A totally new Star Trek television series is coming in January 2017! The new series will blast off with a special preview broadcast of the premiere episode on the CBS Television Network, and the premiere episode and all subsequent first-run episodes will then be available exclusively in the United States on CBS All Access.

The brand-new Star Trek will introduce new characters seeking imaginative new worlds and new civilizations, while exploring the dramatic contemporary themes that have been a signature of the franchise since its inception in 1966.

Alex Kurtzman will serve as executive producer for the series. Kurtzman co-wrote and produced the blockbuster films Star Trek (2009) with Roberto Orci, and Star Trek Into Darkness (2013) with Orci and Damon Lindelof. Both films were produced and directed by J.J. Abrams.

The new series will be produced by CBS Television Studios in association with Kurtzman’s Secret Hideout. Kurtzman and Heather Kadin will serve as executive producers. Kurtzman is also an executive producer for the hit CBS television series Scorpion and Limitless, along with Kadin and Orci, and for Hawaii Five-0 with Orci.

The new program will be the first original series developed specifically for U.S. audiences for CBS All Access, a cross-platform streaming service that brings viewers thousands of episodes from CBS’s current and past seasons on demand, plus the ability to stream their local CBS Television stations live for $5.99 per month. CBS All Access already offers every episode of all previous Star Trek television series.

Sign up for a free trial of CBS All Access and prep for the new show with every episode of the classic Star Trek series available commercial-free!

Star Trek, which will celebrate its 50th anniversary in 2016, is one of the most successful entertainment franchises of all time. The original Star Trek spawned a dozen feature films and five successful television series. Almost half a century later, the Star Trek television series are licensed on a variety of different platforms in more than 190 countries, and the franchise still generates more than a billion social media impressions every month.

Born from the mind of Gene Roddenberry, the original Star Trek series debuted on Sept. 8, 1966 and aired for three seasons – a short run that belied the influence it would have for generations. The series also broke new ground in storytelling and cultural mores, providing a progressive look at topics including race relations, global politics and the environment.

“There is no better time to give Star Trek fans a new series than on the heels of the original show’s 50th anniversary celebration,” said David Stapf, President, CBS Television Studios. “Everyone here has great respect for this storied franchise, and we’re excited to launch its next television chapter in the creative mind and skilled hands of Alex Kurtzman, someone who knows this world and its audience intimately.”

“This new series will premiere to the national CBS audience, then boldly go where no first-run Star Trek series has gone before – directly to its millions of fans through CBS All Access,” said Marc DeBevoise, Executive Vice President/General Manager – CBS Digital Media. “We’ve experienced terrific growth for CBS All Access, expanding the service across affiliates and devices in a very short time. We now have an incredible opportunity to accelerate this growth with the iconic Star Trek, and its devoted and passionate fan base, as our first original series.”

The next chapter of the Star Trek franchise will also be distributed concurrently for television and multiple platforms around the world by CBS Studios International.

“Every day, an episode of the Star Trek franchise is seen in almost every country in the world,” said Armando Nuñez, President and CEO, CBS Global Distribution Group. “We can’t wait to introduce Star Trek’s next voyage on television to its vast global fan base.”

CBS All Access offers its customers more than 7,500 episodes from the current television season, previous seasons and classic shows on demand nationwide, as well as the ability to stream local CBS stations live in more than 110 markets. Subscribers can use the service online and across devices via CBS.com, the CBS App for iOS, Android and Windows 10, as well as on connected devices such as Apple TV, Android TV, Chromecast, Roku players and Roku TV, with more connected devices to come.

The new television series is not related to the upcoming feature film Star Trek Beyond, which is scheduled to be distributed by Paramount Pictures in summer 2016.

I think my wife and daughters will like this. I’m not sure I won’t.

THE “EYE” OF SUPERGIRL

Well, they shouldn’t screw that up too badly, should they?

Actually I hope the show does very well. It’s the CBS part that bothers me…

Corrections and clarifications: An earlier version of this post listed the wrong studio for ABC’s upcoming Agent Carter.

The only major network without a comics-inspired drama now has one.

CBS has closed a deal for Supergirl, a series adaptation the superhuman DC Comics character, cousin of Superman, at age 24. Greg Berlanti (Arrow, The Flash) is producing for Warner Bros. Television with Ali Adler, who worked on Glee, The New Normal and Berlant’s short-lived 2010 ABC superhero series, No Ordinary Family.

The network will produce a pilot for the series, which has not yet been cast, and is very likely–though not guaranteed–to order additional episodes. If it does, the show is expected to join the lineup next season. If not, CBS will pay a significant penalty…