← THE MYSTEREUM
THE OLD MAN →

What I like best about what is implied in this book (hinted at but not much developed in the article) is the idea that you may have competing descriptions of various monsters. Which might very well mean that you have various (interpretive) versions of the same monster, which of course, in and of itself, implies that a monster might be this or might be that, or might even be neither or both in any given milieu or setting. 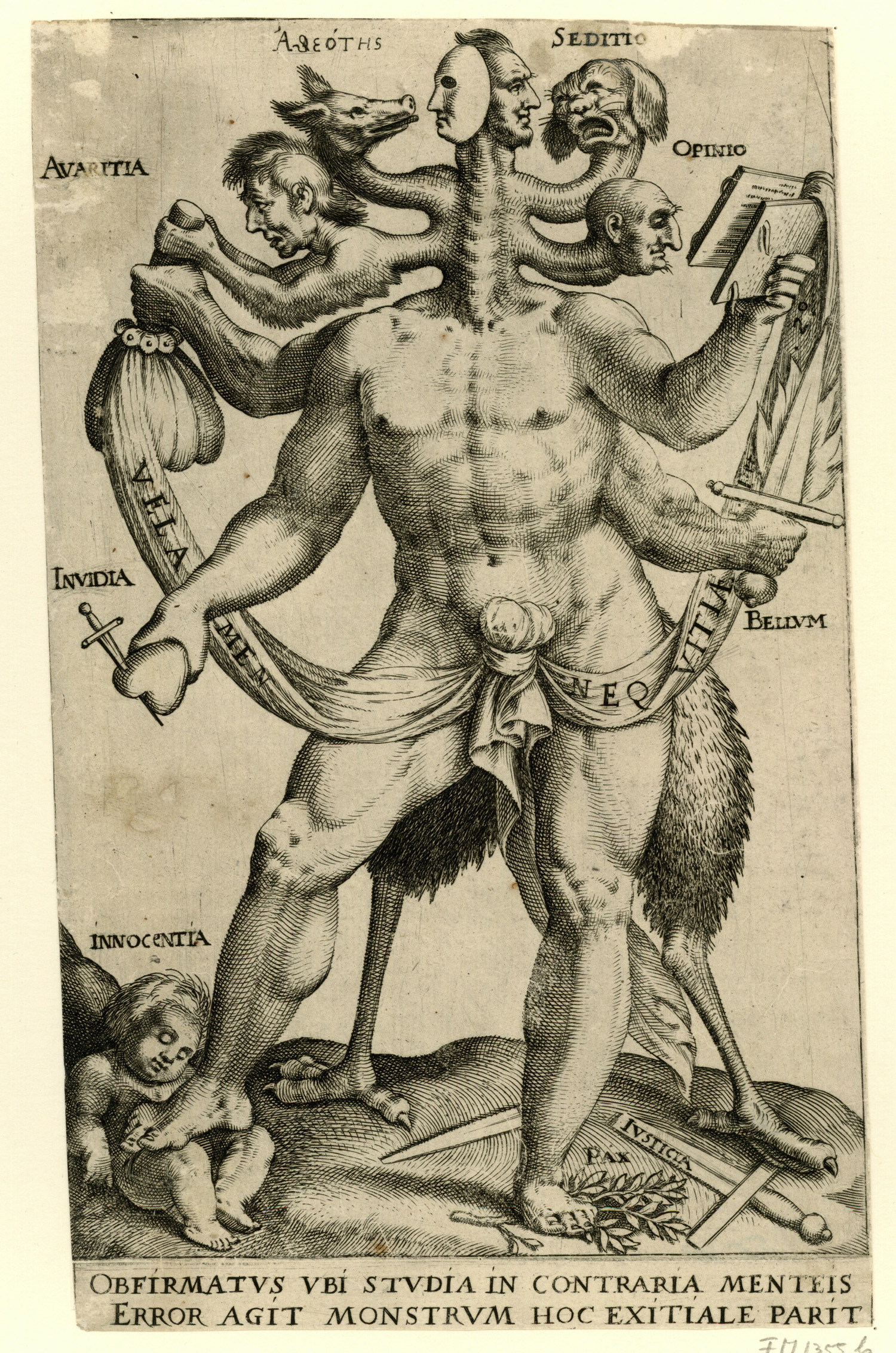 Which would be a very Game of Thrones, Martinesque version of a monster, sure enough, though if you’ve ever read the Silmarillion (or even just the Hobbit) you know that Tolkien really invented the technique of presenting competing and unclear/unreliable versions of history and myth, at least as far as modern fantasy is concerned. The larger idea, of course, stretches all the way back to the Greeks ( and beyond into prehistory and oral cultures) who had several very different and even competing versions of various prodigies and monsters depending upon the author, the source, the time period, the regional geography/telling, and the nature of the myth itself.

As a matter of fact this is something I have often done in my own game designs and in my own fictional writings going back to when I was a kid, but it is extremely gratifying to hear that the idea is possibly being explored in core material books of D&D and possibly for other RPGs as well.

Because what this means, if taken to its logical conclusion, is that even if players have access to the Monster Manual then that does not mean that they are in possession of concrete and reliable information regarding what any given monster’s true nature, behavior, or even physiology and capabilities might be.

Since I have designed and redesigned famous/standardized D&D monsters in this way since I first became a Dungeon Master back in my teens I know precisely how effective this technique can be (as well as how valuable it makes rumor and field investigation and intel-gathering as a capability of classes like Rangers, Rogues, Bards, and Wizards) in designing and developing a truly exciting game and a truly disturbing method of “encountering monsters.” (Potentially, in some ways at least, every single encounter of a monster can b a “first encounter,” even if you have already encountered the same species dozens of times before.)

When every encounter (or at least a large number of them) are built upon rumor, possibility, and analytical interpretation of conflicting reports rather than upon reliable information and hard, verifiable data then Monsters become far, far more dangerous than they ever were before.

So I am very glad to see Core-Designers possibly adopting the same position.

As a matter of fact I’ve written several essays on that very subject.

Such as these as just two examples:

The Blood of Uncanny Monsters

Dungeons & Dragons is changing how it makes books

“We live in a post Game of Thrones world.”

The venerable Dungeons & Dragons franchise, the granddaddy of the modern role-playing game, is now in its 5th edition. And, to hear publisher Wizards of the Coast tell it, the sourcebooks are selling like hot cakes. More people than ever before are discovering the magic of rolling dice and telling stories with their friends, and lapsed fans are returning in droves.

For lead designer Mike Mearls, that’s created a bit of a problem. How do you keep the source material fresh for a 42-year old franchise? And, when you’re in the business of selling books, how do you make the next one more interesting than the last?

Consider a pillar of the franchise, the sourcebook known as the Monster Manual. The first, titled simply Monster Manual, was published in 1977. Since then there have been 18 iterations, some for different editions of the game with different rulesets, others with slightly different snippets of lore. But, through the decades, it’s always been roughly the same thing: An alphabetical list of monsters.

“I have this kind of personal philosophy for managing the product line,” Mearls said last month in Renton, Washington. “I don’t want to duplicate any product that’s come before. I think that if people have seen it, then it’s not really new and it’s not really exciting.”

The first Monster Manual, circa 1977.

This time around, he and his team have decided to do something a little bit different. Their next take on the Monster Manual will be called Volo’s Guide to Monsters and, for the first time, it will have a lot more character to it.

“It’s risky,” Mearls said. “In the end, it’s still a giant book full of monsters. No one would argue with that. But I just think that if that’s all the Monster Manual is, then we’re selling ourselves short. So the idea was, the kind of genesis of it, was that want to do something that’s more story oriented.”

Volo’s Guide will have a narrator — two actually. One will be Volothamp Geddarm, an over-the-top, braggadocious explorer. The other will be Elminster, the wise Sage of Shadowdale. And the two will often be at odds with one another. Their differing accounts will be scattered throughout the book, and take the shape of comments scribbled in the margin.

WIZARDS OF THE COAST WANTS THEIR SOURCEBOOKS TO BE FUN TO READ.

Put simply, the goal is to create a book that high-level players and dungeon masters will enjoy reading. The goal, in the end, is to inspire new stories at the table, not simply reinforce the lore of the Forgotten Realms and ram storylines down player’s throats.

“I have this pet phrase I use,” Mearls said. “I like to say that we’re living in a post Game of Thrones world. Fantasy has changed.

“If you look at science fiction follows, I think an arc that fantasy is following now. In the 50’s, science fiction was very iconic, and at least in movies, very much templated. You had the flying saucer, or the rocket ship, you had either the aliens who were clearly monsters — like the guy in the deep sea diving helmet wearing the gorilla coming to eat people or whatever. Or they were people in funny outfits who were very inscrutable and so much more advanced that we were, and that was your pantheon.”

Later, as science fiction entered the ‘60s and the ‘70s, it began to be entrusted with more serious themes and dealt with issues of change in modern culture as a whole.

“So you have this new wave of science fiction coming through and science fiction grows up,” Mearls said. “It became Alien — a horror movie in outer space. It becomes Soylent Green, which is kind of like this social commentary on science fiction. It’s Rollerball, right? This entire thing about what’s it really mean to have free will, and can there really be freedom in a technological society? But it’s still science fiction.”

THE FANTASY GENRE IS GROWING UP.

Mearls sees Game of Thrones as evidence of the same kind of evolution in the fantasy genre, and it’s his hope that Volo’s Guide can become a new kind of sourcebook to help bring about new kinds of stories.

So what’s inside? I’ve had an advanced digital copy for a few weeks now and I’m pretty impressed at what I’ve found.

The first third of the book is a series of deep dives on specific species of monsters. How specific? Mearls and his team lavish nearly 14 full two-column pages on beholders alone, exploring every aspect of their nature both in and out of combat.

Most of the information is great fodder for dungeon masters. How do you roleplay a beholder? How do you speak like a giant? What does their four-tier caste system contribute to goblin society? What does a gnoll chant to keep his spirits up while on the hunt? What is the lifecycle of a mind flayer?

Well, actually, I’ll let Volo himself handle that last one.

Ever wondered what a hag is most likely to drive off the used car lot, or fancied a careful examination of the kobold pantheon? It’s all in there, and something is going to light a fire in your mind and bring a richer, more memorable experience to the table.

The second third of the book might be my favorite. I’m not able to share much, but suffice it to say that with Volo’s Guide both dungeon masters and players will be able to bring new races to the table, both as player and non-player characters. That includes rules for goblins, orcs and even something called a “firbolg.”

The final third contains rules for 96 monsters that are new to fifth edition, including the Gauth and the Mindwitness.

All told, Wizards of the Coast sent over six pages to share with our readers. We’ll include the final three below.

The very last section of the book features a great add-on. It’s a nice little appendix that includes a handful of fully detailed stock NPCs. It makes the entire package a fantastic resource for dungeon masters, turning a pretty standard sourcebook into a self-contained toolkit capable of spawning dozens of different dungeons — or sparking entire campaigns — without very much prep work at all.

To create it, Mearls says his team has had to take a long hard look at Dungeons & Dragons’ oldest and most iconic creatures. Their goal was to explain them to a degree that’s never been canonically attempted before in one place.

“If you take a look at something like a mind flayer,” Mearls said, “it has that sort of ‘50s science fiction feel. It’s the creepy monster that lives under the bed and eats your brain by the end of story. But I think with a 21st century approach, you can say, ‘Well, who is the mind flayer.’ And it sounds funny, but then you start getting into it. What’s with this guy eating brains?

“Dungeons & Dragons was very much developed with this almost scientific mindset,” Mearls said. “What’s the biology of the mind flayer? But no one asked about its feelings. But when you think about, it the game tells me that mind flayer has an 18 intelligence. The highest intelligence a human can achieve, that’s their average. Literally, they walk in the room and they are the smartest being there. They are smarter than every human they’ve ever ate. So talking to us is like meeting dogs, for them. What’s that got to be like?”

Mearls says that, if the book is successful, he intends for his team to handle more of their upcoming sourcebooks in a similar way.

Volo’s Guide to Monsters will be available at your friendly local game store on Nov. 15. You can also find it on Amazon. It’s also the first Dungeons & Dragons product to have a collectible, alternate cover which you can see here

← THE MYSTEREUM
THE OLD MAN →