“Catalina Kid,” a M4 medium tank of Company C, 745th Tank Battalion, drives through the entrance of the Aachen-Rothe Erde railroad station during the fighting around the city viaduct on Oct. 20, 1944. Courtesy of First Division Museum

It’s Oct 1944.  The Americans were about to engage the Germans in what was to be their largest urban fight in the Second World War.  Aachen was also to be the first German city captured by the Allies.

In this “BFP Into the Rubble” scenario, 10 elite & 12 US 1st line squads teamed up with 3 Shermans and 2 tank destroyers faced off against a mix of 18 German squads with mostly 2nd liners, a pair of AA guns and 2 Hetzers.  The Germans also had 21 concealment counters, 8 Fortified locations and sewer movement capabilities.

There was a lot of rubble.

The Americans were to capture 7 buildings in 8 turns. 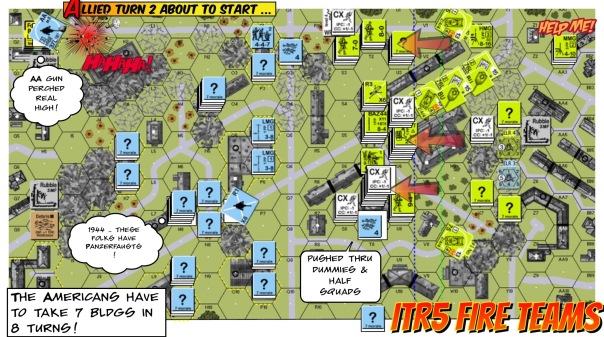 Posted on November 21, 2015, in Uncategorized. Bookmark the permalink. Leave a comment.