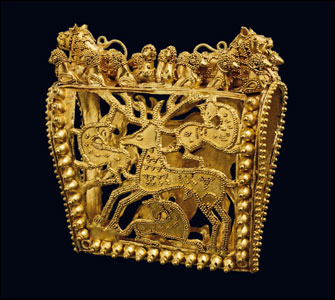 So I’ve been working on some other things in my spare time while not working on my novel The Old Man for NaNoWriMo. One of those things is I have been continuing with design work upon The Perfect Dungeon (working title).

One of the ideas I had this week was for the Terror Trove. (That’s the working term – it is a sort of obverse image of the Treasure Hoard as I’ll explain in a moment.)

The Terror Trove originated as a secret mountainous cave area in the wet-desert just outside the main ancient city ruins around which the Perfect Dungeon story primarily revolves.

A man who was both a powerful Cleric and a powerful Wizard decided that he would take it upon himself to seek to discover and “hoard” every evil artefact and relic he could locate.

His original intention was to construct an “Apotroev” (a reverse treasure hoard – one that was magically and physically separated from our world and one that could never again be plundered) so powerful and so carefully hermetically sealed that the powerful items he placed there would be in effect forever cut off from and removed from the rest of the world. Thereby sealed away, never to be discovered or employed as a threat again these items were magically exiled from the world since the Cleric Wizard (named Arsoginserl, though also sometimes called Insarl the Illuminare) could find no method of destroying most of these things.

“Arsoginserl’s Apotroev” worked very well for centuries after his death, but eventually, due to earthquakes and due to the fact that some of these artefacts and relics were so powerful they began to consume and absorb one another the Apotroev weakened. The evil and magic in them thus multiplied many times in power and force effectively “irradiating evil and magic out into the surrounding world” just as a shielded bunker designed to store radioactive waste might leak if damaged or overwhelmed.

Eventually this was one of the reasons that led to the demise of the original and ancient city of Pesharan.

Anyway Arsoginserl’s Apotroev will be one of the potential sandbox areas attached to the Perfect Dungeon (which is actually a campaign series) if the players want to seek to find and explore it.

However by this point, nearly a millennium after it was originally populated and sealed most of the items have been consumed by the more powerful artefacts and relics and the “survivors” are at war with each other. All of the survivors are by this time either artificially intelligent or sentient or inhabited by evil spirits, or all of the above. And all of these surviving “items” desire to escape back into the wider world. Making them incredibly cunning and dangerous and desperate. Even exposure to the still sealed Apotroev itself has powerful, malignant, and long lasting side effects upon anyone approaching it.

Also buried in the Apotroev, in a secret compartment never discovered by even the most powerful artefacts and relics trapped there, are a number of preserved relics from Arsoginserl himself, such as his robe, his mitre, his crooked staff, his Roseheart, a book of Arsoginserl’s prophecies, a book of his personally created spells (otherwise unknown), his Communion Rod, other valuables, and the Benegemm (an experimental gemstone Arsoginserl himself had created with the help of an angelic ally) with which he hoped to one day cure evil and nullify evil magic. No one knows how far Arsoginserl got in the development and perfection of the Benegemm but it was reputed to have many marvelous capabilities and properties (even if it was still unable to cure evil) by the one account that ever mentioned it. Such as soft-burying and freeing the souls of certain undead creatures. Or encouraging certain criminals to take up a monastic or religious life. Or even to become a Cleric.

The story of the Benegemm is supposedly indirectly related to the famous tale of the thief Tarand Moirloss who later converted from his life of crime and became the famous Cleric Larlfast Urlinger. Moirloss accidentally touched the Benegemm hoping to examine it for potential value and was immediately struck “dead” for seven days. Moirloss recovered in his tomb chamber and was able to dig his way around the setting stone of his tomb and escape his premature grave. Moirloss then sought out Arsoginserl who gave him the legendary Seven Penances of Supernal Peril to complete after which Moirloss converted and was renamed Larlfast Urlinger the Upright. Urlinger is the same cleric often credited with having created the “quill of the thrice inscribed god.”

Though some say that Urlinger became a wandering Cleric-Wizard like his mentor and abbot Arsoginserl, and that the quill was actually constructed by another, a Sage and Hermit named Ramonil the Righteous.