I learned a great deal from playing D&D (as well as numerous other games). And many of those things were even useful. 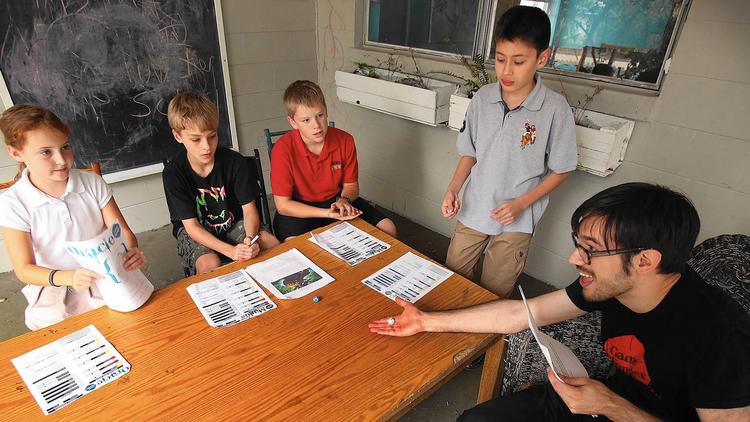 Outside of Hogwarts School of Witchcraft and Wizardry, you won’t find swords and spellcraft on the curriculum at too many learning institutions.

But Phil Zoshak of Orlando isn’t just any teacher.

Each Friday, children ages 7 to 14 in his after-school Game Changer program are transformed into wizards and warriors as they participate in storytelling sessions loosely based on the popular fantasy role-playing game Dungeons & Dragons. In Zoshak’s games, kids aren’t just battling dragons, they’re learning math, leadership and social skills.

“We are riding on a wave of nerd right now,” said Zoshak. “Tabletop gaming is coming back, and if that’s the case, let’s get these kids unplugged off the video games and get them having positive gaming experiences.”

Zoshak is a program coordinator for Page 15, a nonprofit organization that provides free creative-writing activities for children in Orange County Public Schools. Game Changer is Page 15’s newest initiative, and students currently take part during weekly sessions at Misty Forest Academy in Orlando, a private education facility that caters to children in both public and home schools.

Dungeons & Dragons has been played by generations of “proud nerds” such as Zoshak since its original release in 1974. In the game, players assume the roles of fantasy characters in an adventure guided by a “dungeon master” who sets the scene. Each player’s character exists only in their imagination and on a sheet that breaks down their abilities and weaknesses into numerical ratings. Success can depend on the roll of a specialized set of dice.

In Zoshak’s version, the dice-rolling is kept to a minimum and the imagination emphasized. In one recent session, his group of seven players came under siege at the hall of the mythological hero Beowulf. Spell-casters in the group were given a word-search game to finish before the clock ran out; the more words they could find, the stronger the spell of protection they placed on the door.

In the end, the spell wasn’t enough. Zoshak described “splinters spraying out from the door” as the hulking monster Grendel finally forced his way in.

“What do you do?” he asked his players. A flurry of replies ensued. Zoshak gently reminded the excitable adventurers to speak one at a time and encouraged them to work together.

“I can do an invisibility spell,” said Brett Miller, 10, of Orlando.

“I’m going to run and hide and be ready to heal some people,” said Tessa Adamopoulos, 11, whose character was an Oracle, game-speak for a magical medic.

The game was the fifth session Zoshak has organized for the youngest age group in the Game Changer program. Each week, Brett and Tessa join their companions on a time-traveling, episodic adventure through various eras out of history and mythology — two subjects that Zoshak is also happy to teach.

“When I think of how Game Changer started, I think of how I grew up, how I learned,” said Zoshak, who has raised more than $4,500 through crowdfunding on indiegogo.com to purchase writing journals, dice and other materials that will support Game Changer during the next two years.

Now 27, Zoshak first discovered D&D as a 14-year-old in Daytona Beach. An avid video-gamer, the teenage Zoshak found that the social, collaborative aspects of role-playing games sparked his creativity more — and jump-started a dormant interest in literacy.

“Yeah, I have to do math and all this,” Zoshak recalled, “but it’s a lot of reading, a lot of storytelling. Suddenly I’m interested in language and stories. By the end of ninth grade, after having failed my first semester in English, I got an A. I really think that mostly attributes to gaming.”

Although the use of D&D may be a novel idea, the presence of other games in the classroom is common, according to Robert Thompson, director of the Bleier Center for Television & Popular Culture.

Games of any kind can be useful as a “curricular Trojan horse,” said the former professor at Northwestern University in Illinois.

“You’ve got teachers who are competing with kids who are on YouTube and have this constant ability to stimulate themselves whenever they want it and stop it whenever they want it,” Thompson said. “The challenge of sending someone through the long process of teaching them to write, teaching them leadership skills, that is a difficult thing to do. And I think you take any arrow out of your quiver that you possibly can. If Dungeons & Dragons works to do that, I’m all for it.”

A prolific writer, Zoshak hopes that Game Changer inspires the 17 kids in his program. He wants to incorporate other games into the initiative: A chess tournament is scheduled for spring at the Parramore Kidz Zone in Orlando, and Zoshak is hard at work on an educational variant of the fantasy card game Magic: The Gathering.

Tessa had never played a role-playing game before encountering Game Changer, but the Orlando youngster said she “took to it in a snap.”

“Usually, I like to do stuff independently,” she said, “but Game Changer taught me that teamwork can take you anywhere.”